The high priest who gave a light to people who are not rewarded.

Shinran (May 21, 1173 ? Jan. 16, 1263)was a Japanese Buddhist monk. Shinran was a pupil of Hounen and the founder of what ultimately became the Jodo Shinshu school in 12th century.

The hallmark of his idea is “Akunin Shoki”.
“Every action is based on some desires, this is not along with Buddhism teaching that abandon desires. So, nobody can take things philosophically (can’t become Buddha). Everybody is unenlightened person.
However, Amida Nyorai can save us who can’t be spiritually awakened. Amida are always wishing we go to Jodo.”
This idea had saved people who gave up all hope and Buddhism.

After established, this school had been called Ikko shu (single-minded believer’s group), and they had ever fought against political power (mainly 15th – 16th century).
After 16th century, these characters vanished. Nowadays, Jodo Shinshu is the biggest Buddhism school in Japan now.
Shinran was also proponent of Nenbutsu (repeat the name of Amida) “Namu Amida Butsu”.
Jodo Shinshu deny strongly folk beliefs and superstitions.

Main temples of Jodo Shinshu.
We can’t narrow down to one single head temple on Jodo Shinshu.
Because when they got troubles on successor, they were divided to some groups by political power in Edo era.
The representative temples are;
Nishi Hongan-ji (left) and Higashi Hongan-ji (Right).

Their main temples have tendency to be named Hongan-ji.

The Founder of Jodo school Buddhism!

Hounen (1133-1212) is the religious reformer and founder of the first independent?branch of Japanese Pure Land Buddhism called Jodo shu. He preached that?believing in Amida Nyorai strongly. Because Mappou Shisou (one of eschatology)?prevailed in the years that he lived.
He was the first proponent of Nenbutsu (repeat the name of Amida) “Namu?Amida Butsu”. And he preached Buddhism to common people (before Hounen made appearance, Buddhism was religion for nobles only) 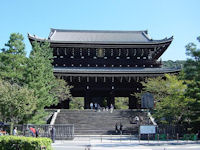 Chion-in is the head temple of Jodo School (Pure Land Buddhism) at Kyoto, Japan.
It’s one of the largest temple. It’s the place where Hounen lived to disseminate?the teachings at Yoshimizu (in what is now Higashiyama Chion-in). Chion-in is the most famous temple, because Chion-in is reported in a tour guidebooks.