The History of Butsudan #3 Turning point and modern Butsudan

In Muromachi period (14th -16th century), Shoin-Zukuri (Zen cultural house) had taken a firm hold to Samurai culture. And they put Buddhism items on at Tokonoma of their house (See also The history of Butsudan #2). Then Butsudan got a turning point.

Rennyo had propagated Jodo Shinshu’s teachings actively, and he had recommended doing a religious service to followers everyday. For that reason, he had issued many “Rokuji Myogo (Namu Amida Butsu)”. 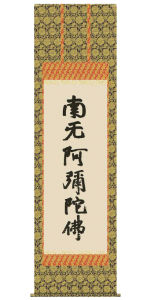 According to records, Rennyo didn’t mention Butsudan. Followers who were given Rokuji Myogo from him had gotten habit of putting it into box-like cabinet.

That is the first case of Butsudan.

The purpose of this system was to make Christianity into prohibited religion. For that reason, common people had got a necessity to belong to Buddhism temple (to avoid to become offender).

Jodo Shinshu followers had advanced Butsudan, because they were getting a habit of having Bustudan (or thing like a Bustudan)

Further, the lay people line of Jodo Shinshu had high affinity to Edo Shogunate’s religion policy. For that reason, other Buddhism schools also had adopted Butsudan in imitation of Jodo Shinshu.

Japanese Buddhism had experienced this history, and Japanese Buddhists got a habit of having Butsudan (at family unit). Nowadays, Bustudan have various styles. 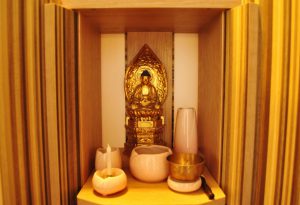