In Heian period (8th ? 12th century), Japanese Imperial culture reached its peak during period. At the same time, Mappou Shisou (one of eschatology) prevailed in the years. Noble clung to Buddhism, they built temples (Jibutsudo). The representative Jibutsudo is Byodo-in Houou-do. Byodo-in may be compared to the large Butsudan. 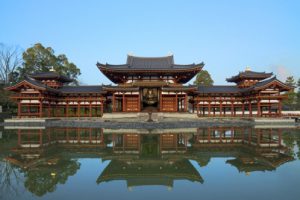 In the latter of Heian period, Hounen, Shinran, Dogen, Eisai and Nichiren are appeared, they put forward a new Buddhism (called Kamakura Buddhism). Buddhism changed from noble’s to common people’s.

In Kamakura period (Samurai ruled Japan), many Samurai became a believer in Zen. For that reason, Zen culture had influenced Japanese culture strongly.

The representative item, Ihai (spirit tablet). Kaimyo (Dharma name) is written on it by monk (after the death generally). 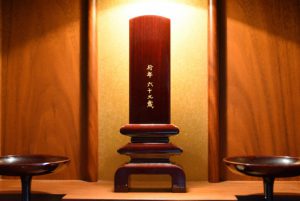 However, the so-called Butsudan had never appeared. They put Buddhism items on at Tokonoma of Shoin-Zukuri (Zen cultural house). 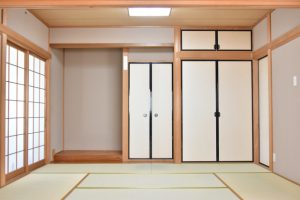