-3- The hallmark and the status quo of Japanese traditional candles

The main material of Japanese candles is Japan wax tree. This trees are growing wild naturally in East Asia only. Moreover, only the trees that grew in Japan become a candles.

WHY?
Craftsman left an ingredient analysis to scientist. As a result, they’ve gotten a one answer. 6% one ingredient was included in the tree that grew in Japan. It’s called “Japan acid”.

The hallmark of Japanese candles are;

Sootless is important.
Because sootless candles don’t give damages to other Buddhism items and temples’ tools (Japanese Candles will give you long use of Buddhism items from 5 to 10 years at least).

Nowadays, Japanese candle studios are only 20. At half of 20 studios, there are no successors. But, Technique of Japanese candles won’t go out for the time being.

We’ve got more serious situation.
The farmers of Japan wax tree are decreasing incredibly from this side.
I mean, Japanese candles will go out in the near future from this side.

So, I want to get you to have more chance to use Japanese candles.

-2- How to make Japanese traditional candles

Output of Japanese style candle are decreasing now. Not be in demand, Japanese candles were pushed out by mass production (paraffin candle) from the market. Because the process of candles are a time‐consuming job, and it might be a little high price.

The main material of Japanese candles is Japan wax tree. That’s one of vegetable wax candle. This trees are growing wild naturally in East Asia only. Moreover, only the trees that grew in Japan become a candles (say later).

One; The farmer of Japan Wax tree harvest a nut, crush it, and extract wax from it. They send them to candle craftsman.

Two; Craftsman winds around paper and an igusa plant (one of rush) to thin wood stick (= wick). He soak wax into the wick.
—-”For that reason, Japanese candles have strong wick and burn till the end.”

Three; He rolls sticks on his hand that have wax. If inexperienced person, it would get burned. (See also the pics).
He repeats to dry and add wax. For that reason, Japanese candles have some rings like an annual rings of a tree. 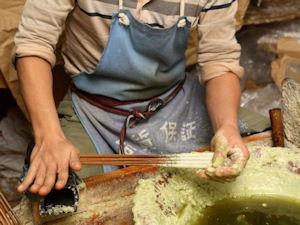 However, Japanese Buddhism had never used western style candles, because Buddhism prohibited taking of life (Japanese people had never ate meat except fish till Meiji period basically). And it needed not importation.

Since Edo period (17th ? 19th century), Japan wax tree were introduced to the domain of Shimazu (in what is now Kagoshima pref.) from Ryukyu Kingdom (in what is now Okinawa, Japan). And output was increased.