Originally, Buddhism events used to be held on lunar calendar.
But now the rites hold on solar calender in Japan. 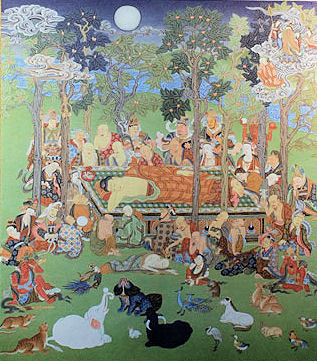 It seems that it’s not so popular in Europe and America, but it’s very important picture in Asian Buddhism area.
There are meaning and rules against composition of a painting.

In the Jodo faith of Buddhism, AMIDA NYORAI who meets dead person was believed that he lives at the far west among people.
And the sun sets to due west on the vernal and the autumnal equinox.
That’s why ancient people decided to carry out the Buddhism rites. So-called it’s Ohigan.

Many Japanese Buddhists are in the habit of going to their family grave.
And we eat Botamochi or Ohagi (Japanese traditional sweets) 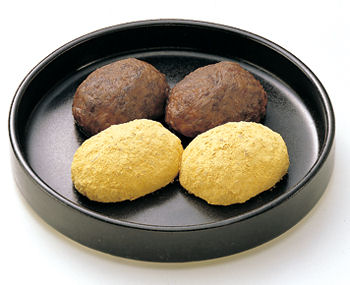 Apr. 8th. — The BIRTHDAY of GAUTAMA SIDDHARTHA
In Buddhism temples, they open the sculpture (below) to the public, and do the rites. Believers pour Amacha (sweet tea) on this sculpture, and get sweets from Buddhism priest. 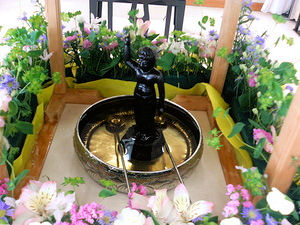 According to Sutra, he was born and walked seven steps right away.
And he rose his right arm up and let his left arm down. Then he said “Tenjoh Tenge Yuiga Dokuson”. This code is his “declaration of human being”.

Mid of Aug. — OBON
August is the month that ancestors come back. It’s called OBON.
It have tendency to decrease religious character in these days, but it’s traditional event. 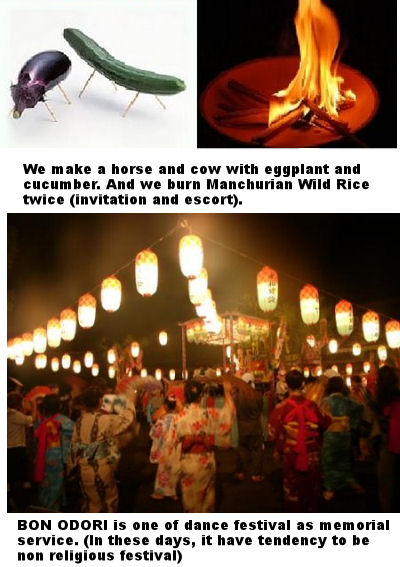 On Aug. 12th, Japanese Buddhists go to family’s grave, and burn Manchurian Wild Rice. This action is called MUKAEBI which means invitation fire. Ancestors come back to descendants with the help of smoke.

Around August 15th, BON ODORI hold. BON ODORI is one of dance festival as memorial service.

In OBON, descendants make horse and cow with eight sticks, eggplant and cucumber.
Descendants want to let ancestors come back fast by horse, and go back slowly by cow.

For that reason, road and train are jammed because many families go back to their hometown. Conversely, Tokyo is to silent city.

Generally, OBON is August event except Tokyo (hold it on July).
Almost businesses are stopped because many people go back to their hometown. 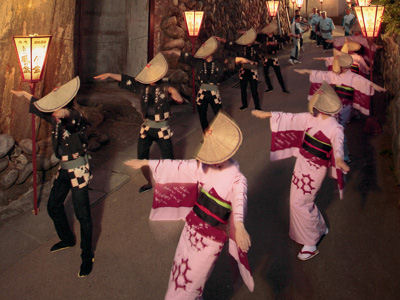 As BON ODORI, Owara is the most famous at Toyama. 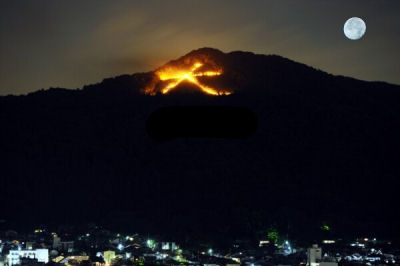 As OKURI-BI, GOZAN OKURIBI is the most famous at Kyoto. It’s describing character with fire on mountain.

Dec. 8th. — JODO-E (Bohdi Day)
I mean, it’s the day that Gautama Siddhartha was spiritually awakened under the Bohdi tree. He became a priest at age, 29. And he reached to spiritual awakening at age, 35.
In Japan, many temples are holding the Buddhism rites.