Japanese considerations of death and life (4)

Jodo school and Jodo Shinshu school are having different interpretation on the consideration of death and life.

Basically, there are no six world in their ideas.
There is only Jodo (Pure Land). After death in this world, go to Jodo and live again at Jodo.

Buddhism teachings ask for spending self-restraining days to us.
But nobody can do that (even monks). Which means nobody can get nirvana.

Amida Nyorai (Amitabha) knows that.
He had lead an ascetic life to take us to Jodo and to save us at Bodhisattva years.
I mean, everybody can go to Jodo.

“Namu Amida Butsu” is the words of thanks to Amida Nyorai (Not magic words, charm).

In Jodo, we will be taught and practice asceticism under Amida Nyorai’s instruction.
And we will be Buddha at there, the Buddha(s) will go back to this world to save people. 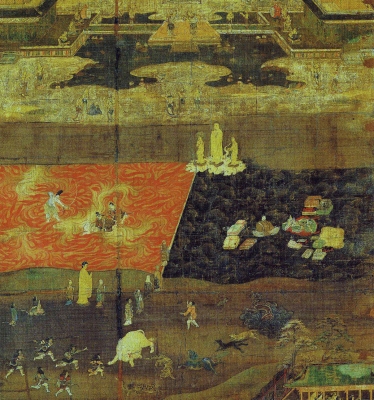 Left side is flame river. It stands for anger and hatred.
Right side is flooded river. It stands for desire and persistence.
People (dead people) are walking on the narrow white path as resisting temptation.
Shaka Nyorai (Gautama Siddhartha) calls out from behind “Don’t be afraid, I watch over you”.
Amida Nyorai (Amitabha) calls out from front “Come on!, I surely save you”.
Thus, everyone can go to Jodo.

Anyway, there is no ghost and ghostlike thing in Buddhism teaching.