The Birth of Buddhism.
Buddhism is regarded as a major world religion and a philosophy; it is based on the teachings of the Buddha, Gautama Siddhartha , a prince of the Shakyas, who lived in or around the fifth century BC. The teachings spread from their roots in India to most of Asia. 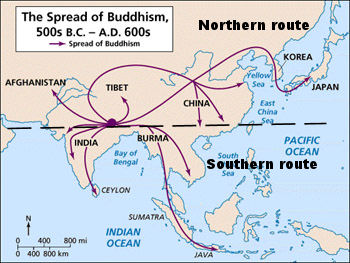 In southern route Buddhism, people have seeking for goal individually as getting an advice from priest. That’s why their important sculpture is Budda only. It’s called Sthaviravada (Theravaada, Jozabu).

On the other hand, in northern route Buddhism, people got together and established a religious body. everybody helped each other.

For that reason, Buddha had been given many role at people’s request. People believed that Buddha can transform to many figures to save people. There are many kinds of sculptures in northern route Buddhism. It’s called Mahayana
and Vajrayana (Daijo and Mikkyo).

The goal of Buddhism
The goal is understanding, awaking, and realizing to truth.
Buddha said that ‘being alive’ is same to ‘suffering’. To get rid of suffering, we have to abandon our desires. Desires are cause of sufferings.

We provide Japanese Buddhism item basically. So, we write Buddha’s names at Japanese pronunciation.
This table is the list of Japanese – English pronunciations.
These names are representative Buddha only.

1.Nyorai
Nyorai (tathagata) is Buddha who had spiritually awakened.
Southern route Buddhism have Shaka Nyorai (Gautama Siddhartha) only.
Northern route Buddism have some Nyorai. They have tendency to be the principal image.

2.Bosatsu
Bosatsu (bodhisattva) are trainee.
They are leading us to truth as doing ascetic practices.
In Northern route Buddhism, they are an object of belief.

Kanzeon Bosatsu (Avalokitesvara) has 33 incarnations. So, Kanzeon has many names. For example,

*…Kannon is clipped form of Kanzeon

3.Myo-oh
Myo-oh (vidya-raja) is incarnation of Nyorai in vajrayana Buddhism.
They lead a obstinate person who don’t understand Buddha’s teaching to truth by force. So, their faces are getting angry. But it’s mercy from Buddha.

4. Ten
Ten (deva) are old Hinduism deities originally.
Buddhism took in them to Buddhism, they became the deities that protect Buddhism.

5. Gongen
Gongen is quite Japan origin Buddhism image. Gon means temporarily. Gen means appearance.
I mean, Gongen is Buddhism figure who appeared as Japanese Gods and goddesses temporarily (incarnation of Japanese God). That’s ancient Japanese sapience to avoid religious conflict between Shinto and Buddhism (called Honji-Suijaku thought).
This idea itself is not Japan origin. It appeared in China and India also before Japan.
These Buddhism deities who brought from other religions are called “Goho-Zenjin (Dharmapala)”.
About details, please read here.

These are representative example.